Blakoemax Lotion rises to the challenge; not only will it provide the necessary electrolytic environment but also special ingredients have been carefully selected and combined by Blakoe’s consultant herbalist using the accumulated knowledge and techniques of over 30 years dedication to produce an ideal formula to help disperse stress, create relaxation and promote a healthy libido. 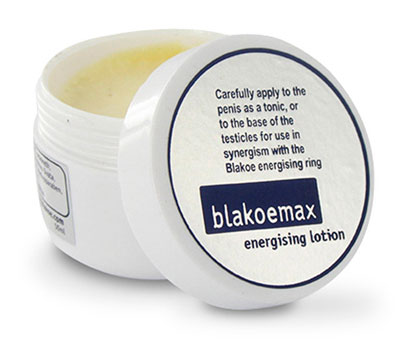 He soon realised that during the summer months the ring seemed to work better for his subjects, after discounting other causes the penny dropped that this must be due to greater dynamic potential provided by extra perspiration. He wondered if this optimum environment could be maintained year round and hit upon the simple, yet brilliant, idea of a special electrolytic moisturising cream. Early trials showed the theory worked and he called the formula “Blakoe Rise Cream”. 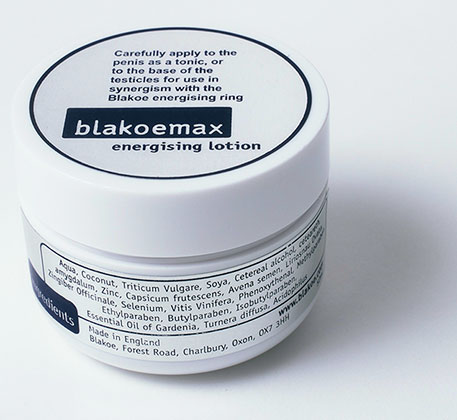 Original Rise Cream has been unavailable for several years but recent technical advances have allowed us to develop a new improved formula from Dr Blakoe’s original in response to repeated requests. Blakoemax lotion rises to the challenge; not only will it provide the necessary electrolytic environment but also special ingredients have been carefully selected and combined by Blakoe’s consultant herbalist using the accumulated knowledge and techniques of over 30 years dedication to produce an ideal formula to help disperse stress, create relaxation and promote a healthy libido. The formula is light and absorbent taking its active ingredients via the dermis directly to the very parts of the body where they are most needed to support activation and re-energisation.

The advantages of using Blakoemax lotion:

By avoiding the harsh environment in the digestive system, transdermal delivery can enhance therapeutic efficacy while decreasing side effects.

Furthermore it is needle-free and above all easy. Transdermal delivery has been described by doctors around the globe as “the delivery system of the future”. Due to the physical size of the molecule (which plays an important role) and high absorption rate lotions in particular are favoured over gels or oils. A review of the literature soon shows that, when delivered transdermally, supplements can be transported to target cells 20 times as efficiently when compared with nutrients taken orally*. This is because the digestive system breaks down and excretes a significant proportion of ingredients before they can be utilised by the body. Not only does this mean transdermal delivery can be more effective but also, as expensive ingredients are targeted more accurately, there is less wastage helping creams to give much better value for money:- a greater measure of success from no more supplements than your body’s precise needs.

• Cream base makes application easy and controllable.
• Onset of symptom relief is faster than oral preparations.
• Symptoms are alleviated at a steady rate and relief can last longer.
• Compounds delivered transdermally often need to be applied less frequently and in smaller amounts.

The active ingredients of Blakoemax Energising Lotion are as follows:

Soya
Blakoemax Soya is gently fermented to release the full 20 latent amino acids, which are the basis of DNA and create the energy to regularly renew the body’s cells throughout life. Particularly relevant among the amino acids are:

Arginine, which promotes energy and fertility. The body uses Arginine to make nitric oxide, a substance that relaxes the blood vessels promoting erection amongst other things. In a double-blind clinical trial, 50 men with problems achieving an erection received Arginine and consequently their sexual performance was improved.

Carnitine, a combination of Lysine and Methionine, which also promotes fertility.

Histidine which promotes orgasm as well as alleviating tiredness and stress.

Soya also contains the minerals: Calcium and Zinc and the vitamins: Folacin, Niacin, Riboflavin and Vitamin B6.

Wheatgerm (Triticum vulgare)
Wheatgerm provides an abundance of Vitamin E, which is well known to maintain a healthy sex drive and is also supportive to the action of Soya.

Siberian Ginseng (Eleutherococcus Senticosus)
A stimulant also rich in Vitamin E, which supports its traditional claim as an aphrodisiac, Ginseng is often recommended as a natural preventative and restorative remedy. Adaptogens, such as Ginseng, have the unique ability to switch from stimulating to sedating effects based on the body’s needs.

The main active chemical components in Ginseng are ginsenosides which have been found to have the ability to improve stamina especially in mature people.

Sexual Performance/Fertility: Ginseng is widely believed to be capable of enhancing sexual performance. Although studies in people to investigate this are limited, in animal studies, Ginseng has increased sperm production, sexual activity, and sexual performance. Whilst one study of 46 men has also shown an increase in sperm count as well as sperm motility.

Physical Endurance: There have been a number of studies in people looking at the effects of Ginseng on athletic performance. Some have shown increased strength and endurance and others improved agility or reaction time. Nevertheless, athletes often take Ginseng to increase both endurance and strength.

Stress: Ginseng has long been valued for its ability to help the body deal with stress. A study of 501 men and women found significant improvements in quality of life measures (energy, sleep, sex life, personal satisfaction, well-being) in those taking Ginseng.

Tincture of Capsicum (Capsicum Frutescens)
A strengthener for smooth muscle and the circulatory systems of the body, Capsicum has many benefits. Studies have shown that it can raise metabolic rates by as much as 25 percent, aiding in treating circulatory diseases, and prevent cardiac deterioration. When used externally, Capsicum is said to increase fertility and combat the mental effects of ageing.

Tincture of Wild Oats (Avena Semen)
Wild Oats are quickly becoming a popular natural alternative to pharmaceutical erection enhancers without their side effects. The tincture is used to stimulate men quickly and effectively. It is effective for treating impotence and premature ejaculation. It also contains compounds which are soothing to the brain and nervous system.

Avena seeds have the highest content of Iron, Zinc and Manganese of any grain. In addition they contain compounds which are good as a nerve restorative, it is also said to be an aphrodisiac.

Studies have shown Wild Oats to be noticeable sexual stimulant for horses and other animals, and further research suggests they have the same effect on humans of both sexes. Dr. Larry Clapp has studied alternative virility medicines extensively and concludes that it “works very powerfully to enhance erectile function”.

Zinc
Zinc is essential for every tissue of the body, particularly for the reproductive and immune systems. A lack of Zinc is a known cause of impotence and foods that are rich in Zinc are well known aphrodisiacs.

Adequate Zinc levels are essential for both testosterone levels in blood and reproductive health. In men over 40 years of age, testosterone deficiency is more common than hitherto thought. In adult males, the testes and prostate have particularly high concentrations of Zinc. The sites where male hormones attach to cells (androgen receptors) require Zinc in order to function.

The authors point out, “Decreased testosterone levels, problems with wound healing, and age-associated lower energy may all be related to marginal Zinc status.” They also note that serum Zinc levels decrease with age, and that the ability to absorb Zinc is also decreased with age.

Ginger Root (Zingiber Officinale)
Ginger has been well researched and many of its traditional uses confirmed. Specificaly included in Blakoemax as a warming remedy, ideal for boosting circulation where it is most needed.

Damiana (Turnera Diffusa)
In South America and Mexico where it is grown Damiana, a small shrub with aromatic leaves, has long been used as an aphrodisiac and sexuality tonic.

It is well known in South America as a sexuality tonic and is recommended by many top herbalists. It stimulates the intestinal tract and brings oxygen to the genital area. It also increases energy levels which does a lot to restore libido and desire.

Damiana has a dual effect. It can work quickly to stimulate the genital area by enriching the oxygen supply, while longer term use can improve sexual fitness and performance.

In scientific studies, extracts of Damiana speeded up the mating behavior of “sexually sluggish” subjects, and results of further studies are eagerly anticipated.

Muira Puama (Liriosma Ovata)
Harvested in Brazil Muira Puama is traditionally used both as an aphrodisiac and for impotence. Muira Puama is one of the most active botanicals with a long history of traditional use as an energy tonic, general health improver and remedy for impotence & sexual insufficiency. It is known in some circles as “the Viagra of the Amazon” and in fact, many people in the know consider it the new Yohimbe but without the side effects.

The roots of this Amazonian tree were the subject of a study conducted by the UCLA School of Medicine. The study showed a significant improvement in both erectile function and sexual desire. The Amazon natives have known this for centuries, as this herb has been widely used as an aphrodisiac by both men and women, and is commonly known as “potent wood”.

Muira Puama has also been used for stress management, nervous system stimulation and for general overall health. Two French studies showed that Muira Puama seemed to improve libido and sexual function. Scientists also believe that this herb increases testosterone levels, though further studies are needed to prove this without doubt.

A clinical study with 262 patients complaining of lack of sexual desire and the inability to attain or maintain an erection demonstrated Muira Puama extract to be effective in many cases. Within 2 weeks, 62% of patients with loss of libido claimed that the treatment had dynamic effect while the majority of patients with “erection failures” felt that Muira Puama was of benefit. Presently, the exact mechanism of action of this herb is still under investigation. From the preliminary information, it appears that it works on enhancing both psychological and physical aspects of sexual function.

Muira Puama is employed widely in herbal medicine being listed in the British Herbal Pharmacopoeia, a noted source on herbal medicine from the British Herbal Medicine Association, where it is recommended for the treatment of impotence. It has been gaining in popularity in the United States where herbalists and health care practitioners are using Muira Puama for impotency. While so-called “aphrodisiacs” have come and gone in history, Muira Puama has risen above this class of products and is now being recognised as the most effective natural therapeutic approach for loss of libido.

Gardenia
A divinely fragranced essential oil that is a well known aphrodisiac.